Despite all the uncertainty surrounding the sport of college football, things continue to be full steam ahead in the SEC as the Arkansas Razorbacks kicked off 2020 fall camp with a 2.5-hour practice on Monday afternoon.

Following the initial practice, head coach Sam Pittman, running back Rakeem Boyd and linebacker Bumper Pool met with the media via Zoom, as has become customary due to Covid-19. The trio addressed various topics regarding the practice, the newly-released schedule and other related items.

The Big 12 and ACC have had their full 2020 schedules out in the public eye for awhile now, but the SEC had kept quiet on the subject. That is, until Monday when the conference released its full slate of games on the SEC Network. Revealing all week one matchups first, Arkansas learned that head coach Sam Pittman’s former squad, the Georgia Bulldogs, would be traveling to Fayetteville to open the season.

Georgia, ranked No. 4 in the preseason Coaches’ Poll, was home to Pittman from 2016-2019. Pittman departed Arkansas and took the gig as the Bulldogs’ offensive line coach and associate head coach under Kirby Smart. The ‘Dawgs are expected to compete with Florida atop the SEC East, but will be breaking in a new quarterback in Wake Forest transfer Jamie Newman as well as an entirely new offensive system. According to reports, Arkansas opens as a 24-point underdog to UGA, but the Razorbacks don’t seem to be backing down from the fight.

“As far as Georgia goes…I’ll be excited to see all the guys. I mean, you look at the University of Georgia. They’ve been the East champs three years in a row, national runner-up, two [Sugar] Bowls, one victory. They’re a big, tough, physical, greatly coached football team,” Pittman said after practice. “They’re on our schedule and we’ll be excited to have a home-opener here. I have great respect for everybody in that program…It’ll be a great measuring stick to see where we’re at.”

Boyd and Pool both alluded to ways they plan on preparing for the Bulldogs, including playing a certain song on repeat for six straight weeks.

“It’s big time. Coach Pittman’s first game getting to play Georgia at home. He says he likes to play the fight song of the team we play for week one, so we get six weeks of the Georgia fight song and it’ll be on our mind every single day. I’m more than on board for bringing them in here and having a great week one,” Pool said.

The Hogs were on the practice field when the conference released the rest of the schedule, so Pittman and company didn’t have much to say on the matter. While some were angry with the draw Arkansas got by adding Georgia and Florida to the schedule, the setup of the schedule actually did the Razorbacks some favors. Six of Arkansas’ 10 total opponents play the Hogs the week after facing one of the expected top-4 teams in the conference. While bookends of Georgia and Alabama certainly aren’t ideal, there are some matchups mixed in that are ripe for the taking.

Franks Kicks Off Camp As QB1

As is customary when fall camp opens up, the media was chomping at the bit to get some quarterback news. After having a staff that loved to play musical quarterbacks the past two seasons, Pittman and offensive coordinator Kendall Briles’ approach has been a fresh air. While there will be competition for the starting spot, neither coach has been shy about alluding to the fact that it’s Florida transfer Feleipe Franks’ job to lose this fall. Franks, who threw for for 2,457 yards and 24 touchdowns as a full-time starter for the Gators in 2018, provides veteran leadership and a live arm to boot.

“Feleipe has a very, very strong arm. I thought he was really accurate today. He played like you certainly hope a veteran quarterback would play,” Pittman said.

Boyd was also quick to complete his quarterback, saying, “Feleipe, from what I’ve seen, the guy has stepped up tremendously. I see him sometimes in film room when you’re not even supposed to be in there. On the field today, he looked good. Just looked like an older guy that knows what he’s doing out there,”

Franks will be pushed by redshirt freshman KJ Jefferson as well as true freshman Malik Hornsby. Jefferson, who saw action in four games last season showing off his athleticism and power, hopes to continue to give his counterpart a run for his money. Hornsby, a highly-sought-after recruit, is doing his best to grasp all the offensive concepts but also brings elite athleticism under center.

“KJ, I’m really excited about him because he’s learned the offense and run the offense. But you have to understand he’s still very, very young as a quarterback in college. He’ll have to play faster and things of that nature, but that will come with reps,” Pittman said. “Malik Hornsby’s done a really good job. He has a really good arm on him. You know, he’s fast. I got to see him throw today instead of doing ‘this’ without a ball. He has a strong and accurate arm.”

It’s difficult to talk about anything this year without alluding to the global pandemic going on and Monday was no different. While they were still many unanswered questions and concerns caused by the virus, the Razorbacks seem to be satisfied with the rules and regulations put in place to maintain their safety. Running back Rakeem Boyd raved about the measures the staff is taking in order to make sure all players fell safe.

“Watch who you hang out with. Wear your mask when you go out in public or when you’re going to eat. Around the training room, the football staff has been great. They hand us water bottles, we don’t get to touch it. If you see a guy make a good play, you give them an elbow or something like that. It’s a good deal that we’re keeping the campus safe and clean,” Boyd said. “A lot of people have to understand that we’re better here. If we go home, we have no safety. We have none of that. We probably wouldn’t even wear masks if we go home individually. All of us being here together and Coach getting on them about, ‘Hey keep your masks on.’ You have to walk around the building with a mask on so the safety around here has been good. I feel really good about it. It feels like home so much. All around, it’s a good deal.”

Coaching Arkansas an ‘Honor’ For Pittman

“I’ll get better everyday. I have to learn as a head coach how to run a practice exactly like I want. I thought it went well today, but there are some things that I wrote down that I’d like to change…Just some things that I thought might be the best for our football team that I don’t know,” Pittman said. “As far as being the head coach at Arkansas and going out there to a practice, it was everything I thought it would be. Who made that happen is our assistant coaches and our team. We just keep preaching we’re a blue-collar team. We’re the Arkansas Razorbacks. Let’s go play hard, play tough and play smart. They did that today. I was proud of them. I was really honored to be out there with them.”

In addition to enjoying himself, it appears Pittman did a quality job for someone fulfilling a job they’ve never done before. The reviews for Pitt from the players have been nothing but positive all offseason and that continued this week. Both Boyd and Pool had quality things to say about their fearless leader.

“I think Coach Pittman does a great job of making sure our tempo is correct. Whenever he sees guys not upholding the standard, he’s the first one to call somebody out. Kind of get that juice flowing. I think that’s big,” Pool said. “It doesn’t seem like Coach Pittman’s in his first year. He’s handled everything perfectly. He has this mindset of who cares what happens. Who cares what’s thrown in front of us. Let’s keep that same mindset of let’s work on today. If tomorrow comes, we’ll attack it. Never get too down about what you think is going to happen. Just stay positive…He’s not going to give you any BS, it’s just straight who he is. You can read him, so we’re all calm because of the way he is.”

Arkansas will take Tuesday off before hitting the practice field again on Wednesday. Media is expected to get some sort of availability at Wednesday’s practice.

I’ve been a Razorback since birth. From Jones to McFadden to Mallett to whatever you call the last two years, I’ve continued to eat, sleep and breathe Arkansas athletics. After being away from sports media for over a year, I couldn’t shake my Razorback fever. I’m pumped to join the Natural State Sports squad and help take it to the next level by providing the most fun and interactive Hog coverage around. Woo Pig.

Share on Facebook Share
Share on TwitterTweet
Share on Pinterest Share
Share on LinkedIn Share
Share on Digg Share
Tyler Davis
I’ve been a Razorback since birth. From Jones to McFadden to Mallett to whatever you call the last two years, I’ve continued to eat, sleep and breathe Arkansas athletics. After being away from sports media for over a year, I couldn’t shake my Razorback fever. I’m pumped to join the Natural State Sports squad and help take it to the next level by providing the most fun and interactive Hog coverage around. Woo Pig. 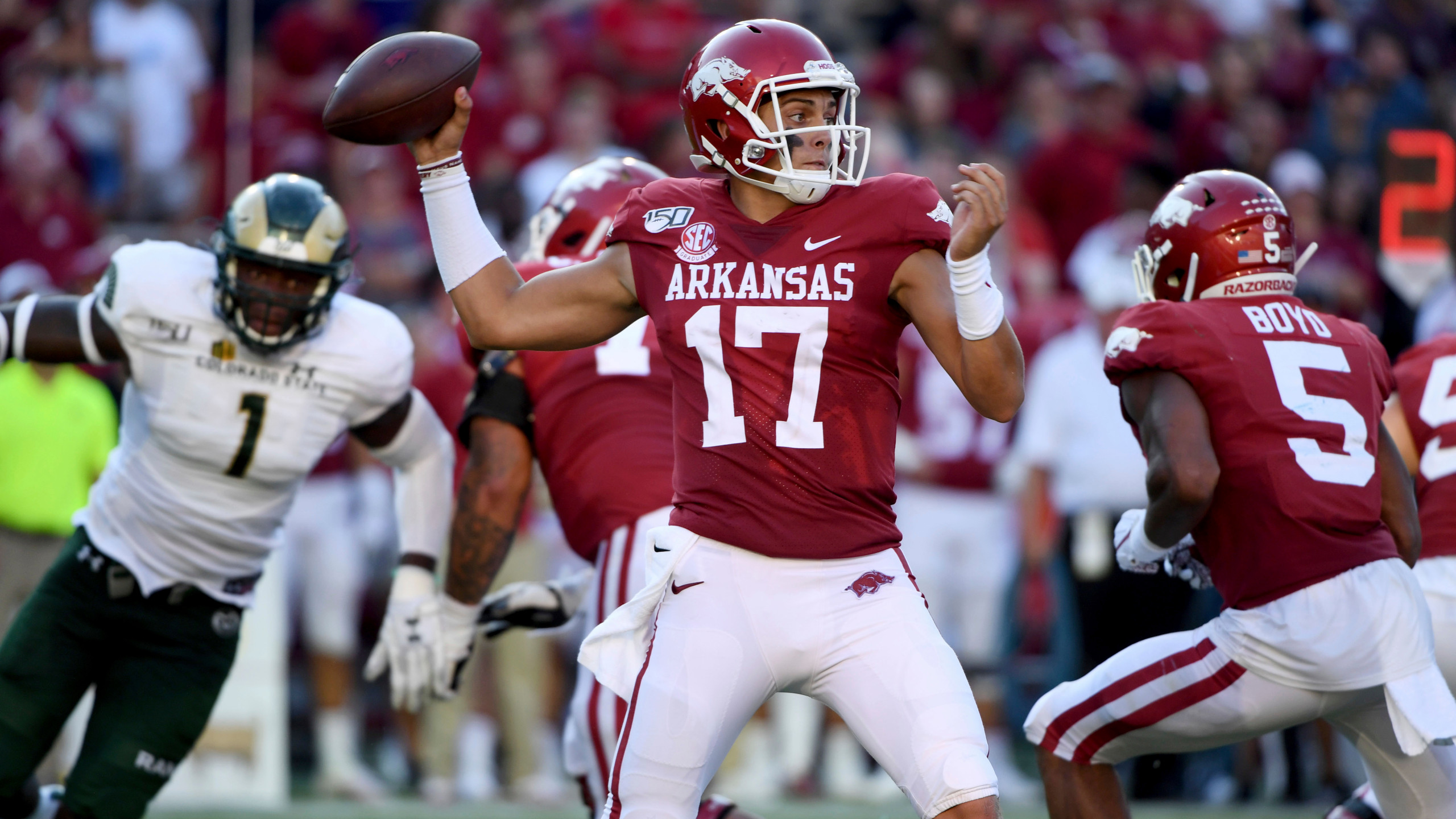 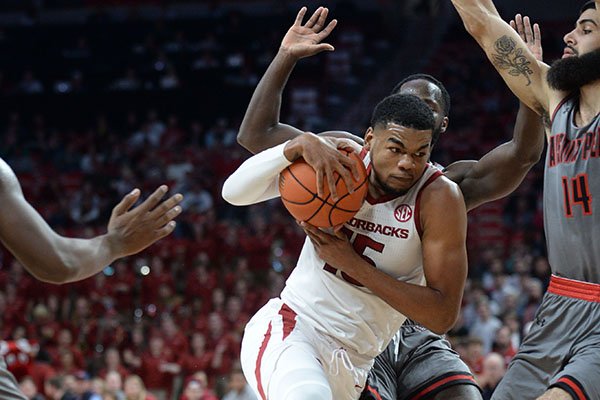